I recently reviewed Kathryn Anthony's novel Konstantin's Gifts on Amazon and Goodreads.  I wanted to elaborate a bit here and discuss the entity from Slavic folklore called the rusalka, which Kat Anthony adapted for her story.  We see lots of werewolves and vampires in current popular writing, but the rusalka is much rarer.  Fel Wetzig in a post on her folklore-oriented blog recently mentioned the rusalka: "In Slavic folklore, the rusalka dwells in waterways–part fish, and part women. At night the left the water to dance in the meadows, seducing handsome, young men and luring them to the river to die."
Wikipedia describes the rusalka thus:
"In most versions, the rusalka is an unquiet dead being, associated with the 'unclean force.' According to Zelenin, people who die violently and before their time, such as young women who commit suicide because they have been jilted by their lovers, or unmarried women who are pregnant, must live out their designated time on earth as a spirit.
"The ghostly version is the soul of a young woman who had died in or near a river or a lake and came back to haunt that waterway. This undead rusalka is not invariably malevolent, and will be allowed to die in peace if her death is avenged.  ...  While her primary dwelling place was the body of water in which she died, the rusalka could come out of the water at night, climb a tree, and sit there singing songs, sit on a dock and comb her hair, or join other rusalki in circle dances (Polish: korowody) in the field.  ...  Rusalki like to have men and children join in their games. They can do so by enticing men with their singing and then drowning them, while the children were often lured with baskets of fruit. Men seduced by a rusalka could die in her arms, and in some versions hearing her laugh could also cause death. Alternatively, they would attract men, mainly bachelors, and tickle them to death."  (Rather amusing!)
Wikipedia goes on to list a number of literary adaptations of the rusalka legend:  novels by C. J. Cherryh and Poul Anderson, operas by Dvorak and Dargomyzhsky, short pieces by Gogol, Turgenev, and Pushkin, and several others.
Kat Anthony's novel concerns a fire rusalka, which is not mentioned in Wikipedia.  When I Googled "fire rusalka," I came up with a post by the author herself in which she discusses what title to give her novel:
"So what about: “Fire Rusalka“? This is closer. Vasilisa, my main character, is a unique hybrid–she has the strength of the lycanthrope, without any of its negative side effects. And, she has the charisma of the rusalka–a kind of nymph in Russian mythology whose voice and face create a kind of compulsive fascination that they use to draw unwitting mortals to their watery graves. I made up the idea of a rusalka associated with the element of fire, so this is a different take that might intrigue those who are familiar with the mythology. So, for the tiny subset of the population who are fond of the rusalka myth, this might be an intriguing title."
So we see that the fire rusalka is an invention or adaptation of the author's.  It makes some sense to do this; since the rusalka is an elemental spirit, it could easily take different forms.  As for the title, I'm glad Anthony settled on Konstantin's Gifts, since I think it captures the irony of the book -- what the mad scientist inflicts on his victims are hardly gifts in the positive sense, and yet they are gifts in that they enable the victims to rise about their victimhood, both as serfs/slaves and as powerful deviants. 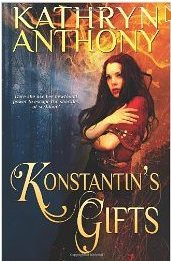 The novel could be stronger; see my review.  I would have preferred to see more done with uncommon concept of the rusalka and perhaps even to have omitted the vampires and werewolves altogether.  It might have been possible to emphasize the relationship between Konstantin and Vasya and develop the Prince's character, making him more complex.   I had originally intended to discuss here a few more aspects of the book that could be improved, but I think I'll leave the topic alone.  As readers of this blog know (see my post "Analysis: Katabasis, by Kathryn Anthony"), I think Kat is a very good writer with lots of potential to write ever improving fiction.  You can try Konstantin's Gifts for yourself, and I would recommend that you do so.  It's available at Amazon.

Posted by Lorinda J Taylor at 8:36 AM