Another look at the red-orange Garuda whom Robbie was talking about: 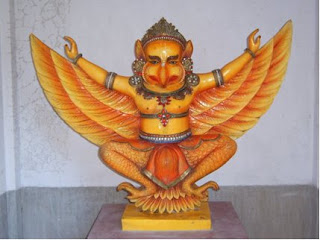 http://en.wikipedia.org/wiki/File:Garuda02.jpg
This work has been released into the public domain
by its author, GourangaUK at the wikipedia project. This applies worldwide

Posted by Lorinda J Taylor at 8:27 AM 2 comments: Links to this post

Two Front Covers for The Valley of Thorns!

Finished! Or as finished as it can be at this point! I did two versions. In the beginning I got frustrated with the clutter of the full battle scene, so I resorted to abstracting the element of the fight between Lug'tei'a the Warrior Priest and the Demon Warrior Sho'choi'jik'a and adding a border and a few thorn bushes to reflect the title. Then I decided to go ahead and finish the first one after all -- the one with the valley wall, the lookout up in the Awl's Eye, opposing armies, identifiable characters, etc.
SO LEAVE A COMMENT!  WHICH WOULD YOU RATHER SEE ON THE COVER?

Posted by Lorinda J Taylor at 1:49 PM 4 comments: Links to this post

Bad Spelling is the first volume of the author’s fantasy series The Witches of Galdorheim.  It’s intended for Young Adults although I think children from age 11 up would enjoy it.  It deals with a colony of European witches who escaped medieval persecution by fleeing to an island in the Barents Sea (north of Norway, Finland, and Russia) and using a magic dome to “terraform” it into normal, livable space.  This region is remote enough to be unfamiliar to the average American and thus can substitute for a constructed world filled with trolls, ogres, shamans, and werewolves.  The story deals with a female adolescent witch named Kat who can’t for the life of her learn how to “spell,” that is, cast spells.  Finding out why and solving the problem is at the heart of the plot, which is lively and fast-moving, although a bit shallow in spots (but then in a short YA book one can’t expect much psychological probing of character).
The book is filled with clever word plays comparable to “Bad Spelling.”  Chapter titles like “Scry Me a River” and “The Troller Coaster,” as well as allusions to modern conveniences unexpected in this remote witches’ world (Botox, satellite phones, and snowmobiles) form a considerable part of its charm.  I got a particular chuckle from this remark (spoken by a troll) regarding the snowmobiles: “That fat elf at the north pole runs a dealership in the off-season.  Gave me a really good fleet rate.”
I was intrigued by the linguistic elements.  A poem about a troll from the Eddas of Snorri Sturluson is quoted.  I checked and it’s real.  The translation is slightly different from those given in Wikipedia; I don’t know if the author translated it herself or found another translation or simply altered the translation.  There is also a lot of linguistic give-and-take between Kat and the Sami.  I checked the word “lumooja” and discovered it’s Finnish for witch.  All of those allusions can simply be accepted as imaginary or they can be used to inspire the interest of young people in the languages of the region.
The premise of the story is set in the Prologue, which is laid “November, 1490 – somewhere in Germany.”  Here we learn how it happened that the witches established their colony on the Barents Sea island.  The author chose to write this prologue in a stilted and phony-sounding dialect, which I presume is meant to suggest an archaic period (something already established in the dateline).  It’s full of sentences like this: “Why cannot they just leave us be?”  “I’m afraid ’tis nothing else we can do,” which isn’t even grammatically correct: “I’m afraid it is nothing else we can do (?)”  This dialect serves no function, because the people in question would not have been speaking English at all in 15th century Germany.  Thus, all the quoted dialogue is a translation.  I found that opener a little off-putting, but fortunately the Prologue is only one page long.
But that’s just a minor quibble.  The book as a whole is very entertaining and educationally suggestive, and I heartily recommend it for the appropriate age group.
Posted by Lorinda J Taylor at 2:21 PM 2 comments: Links to this post