I've finished the first revision of The Buried Ship at the End of the World, the sequel to the six-volume series The Labors of Ki'shto'ba Huge-Head.  I expect to publish it within a couple of months, so I thought I would reveal the cover art.  I've also done the two maps for the paperback and the colored version for the back cover, but I haven't put them up yet on the Map page.   This will be the cover unless I come up with something better.  The problem is not to give away too much of the plot of either this volume or the sixth volume, so subject matter is limited.  Comments are welcome!
I was pretty disgruntled when I wrote the blog post back in June,  but things have gotten a little better.  I finally figured out how to adapt the horrific Medea story -- it's still horrific, but more in keeping with the culture and the inhabitants of the world in which I laid it. The style and tone are different from the other six volumes in the series, but that makes some sense since it's not written by Di'fa'kro'mi the Remembrancer.  After all, intelligent termites are just like humans-- no two authors write exactly alike! Besides, we have a different narrator in this book. I like the story pretty well, better than I thought I would when I was writing the early chapters.
But I can't help being a little sad.  I won't be writing any more books about this particular cast of termite characters and I'm going to miss them so much!  I've pondered several different takes -- a Sherlock Holmes adaptation, even a retelling of Huckleberry Finn, all in the context of the termite culture.  And then there is the possibility of a story laid several thousand years into the future, after the Shshi have become high tech and are about to fly off to the stars themselves.  In the meantime, The Man Who Found Birds among the Stars beckons.  So what will I do next?

Posted by Lorinda J Taylor at 7:00 AM No comments: Links to this post

Email ThisBlogThis!Share to TwitterShare to FacebookShare to Pinterest
Labels: Buried Ship at the End of the World, Cover art, Labors of Ki'shto'ba Huge-Head (Sequel), Medea

New Five-Star Review of Revenge of the Dead Enemy 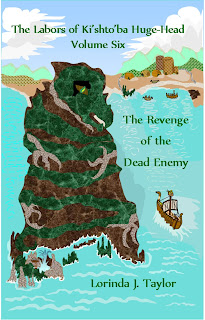 Five Stars to John Clifford for a great review
of v.6 and the whole series!

This is a review of the whole series, including the the prequel, The Termite Queen.  All of the best of all of the great epics from Ur to Iceland in one smooth flowing story, with a lovable cast of heroes, many of whom play surprising roles once you think you have them pegged from one epic, and a cast of villains both thoroughly detestable and occasionally pitiable. All the themes are here, all the feats, and yet the stories are fresh and exciting. Pretty amazing for a story about a group of intelligent termite of various species, but they are social creatures with all the problems that entails and so super human (termite?) responses are called to meet them. And those efforts have all too human consequences for termites as well. So the epic flows on in a natural (though, for those involved, a foreordained) way from feat to feat. And yet, alas, we end with one path finished but another begun and dropped. I have not yearned for the next step, a new epic built on this, so much since the latest volume of Song of Ice and Fire, more so even than Harry Potter. But it is in the works!


What writer wouldn't relish being compared to
The Song of Fire and Ice?
See this review and two other 5-star reviews
of this book on Amazon
and also view my books on Amazon.co.uk,
Smashwords and Barnes & Noble

And watch this blog for a cover reveal on the sequel volume!
Posted by Lorinda J Taylor at 1:09 PM 2 comments: Links to this post