Termite Microphotos: How I Designed the Shshi

Over on my other blog, a post which continues to regularly draw views is that silly microphotograph of the frontal aspect of a termite worker's face! It's had 60 views, including two just yesterday!  So I've decided to begin publishing the microphotographs on which I based my different species of intelligent termites that are found on the planet 2 Giotta 17A.  A comment I received once led me to believe that not everybody knows what a termite looks like.  Of course, there are many different species, whose appearance differs mainly in the soldier caste -- in the shape of the mandibles (jaws) and the size of the head.
These photos are all from that wonderful website by Dr. Timothy Myles.  Unfortunately, it's no longer being maintained, but it's still available here on the Internet Archive.  You can find many more microphotos of different termite species there. (Unfortunately, I found I was having trouble navigating in that URL, but give it a try, anyway.  It could have just been a maintenance issue.  It's a good thing I copied the pertinent information into my own computer when I was doing the research!)
I was concerned about publishing these pictures because of copyright   .  But I've had contact with Dr. Myles in the past -- in fact he has read some of my books and liked them a lot.  So I tried to get in touch with him to ask his permission to publish the images.  I sent him an email and I left messages on his Facebook page, but he seems to be totally incommunicado right now.  Therefore, I'm going ahead and using the pictures.  Dr. Myles, if you see this and you have any objections, please get in touch and I'll take the pictures down!  By the way, Dr. Myles is also an expert on fungus and does spectacular mushroom photography, which you can see here at the Fine Art America website.  Why don't you head over there and reward Dr. Myles for his great termite work by buying a print of one of his photos? 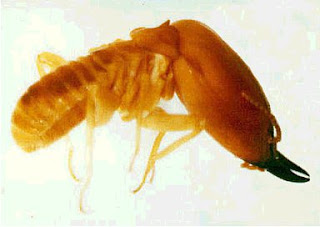 Base image for Shum'za (Shshi) Warriors, the kind that live in Lo'ro'ra.  Commander Hi'ta'fu in "The Termite Queen" looks like this.  Compare the cover drawing for v.2, where all the Warriors in the background have this sort of flattish head that is much smaller than the Da'no'no Shshi's heads.  These are also the type of Warrior seen in the River Fortresses.  Nei'ga'bao (Achilles) is one of these.
It's interesting that both these species are in the same genus, Macrotermes, and yet they really do look quite different and have quite different mandible structure. M. carbonarius appears to have a nasus (that tubular looking thing that sticks out at the front of the head), but I eliminated that in my "people."

Pterotermes occidentis: male alate
You're looking at Di'fa'kro'mi's head!  Of course, in my drawings I simplified the anatomy a lot and I repositioned the antennae.  The Shshi use their eyes a lot more than terrestrial termite reproductives would ever have occasion to do, since most of those live only a few minutes after emergence.  Therefore, I placed the antennae behind the eyes.  But you can see the ocelli (the auxiliary eyes) here -- that little semi-transparent knob above the compound eye.  And you can see the pronotal shield covering the neck.  Actually, I think this creature has a rather knowing and intelligent expression!
﻿ 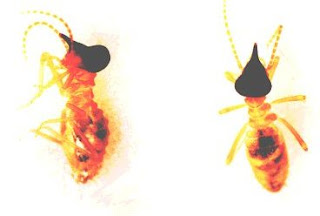 Constrictotermes cyphergaster (soldier) (Brazil)
This is a nasute termite, i.e., the soldier has hardly any mandibles at all, instead of the huge mandibles of the soldiers of non-nasute species.  "Nasus" means "nose" and "nasute" simply means "big-nosed," from Latin nasutus.   Nasute soldiers are basically syringes; they spray acid or some other compound out of the nasus from a gland in their heads.  Look at the book cover for v.2 of the "The Termite Queen" and you will see a few of the Northern Nasute Warriors on the front lines of the battle.  I modeled them almost exactly on the above photos.
﻿
﻿ 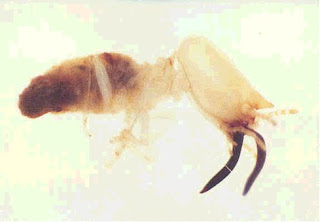 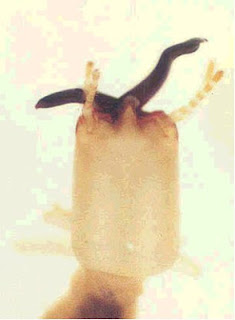 Varieties of termite also exist called nasutoids; these have not only a nasus that sprays poisons but also formidable mandibles.  Here is the one I used as the model for Ju'mu, the strange outland Shi encountered in "The War of the Stolen Mother."
You can see in the body view above that this character has a pointy nasus on top of its head, and huge downward-curving and crossing mandibles.  It even has the stubby antennae and the stripe around the belly that I gave Ju'mu.  Possessing the two characteristics of the non-Nasute Plains Shshi and the mountain-dwelling true Nasutes makes this a good candidate to represent the Centaurs.  It was the closest I could come to the state of a hybrid and still make the creature a big termite.

I used a number of these nasutoid species in designing some of the other peoples that the Companions will encounter during the later part of their quest. I'll leave most of those for a later post.  It's absolutely fascinating to see the huge varity of mandible shapes and general body conformation!
Posted by Lorinda J Taylor at 10:09 AM